But it wasn’t hard to chase the late winter blues away spending an afternoon in Elk’s Bluff Winter Greenhouse, surrounded by beds and hanging planters crammed with greens gorgeous enough for the devil on my shoulder to suggest that sinking down on my knees and grazing might be an option.

Luckily, there was a full salad bowl included with lunch at the Deep Winter Producer’s Association meeting just north of Montevideo, and no one looked askance when I filled my plate twice.

Carol Ford and Chuck Waibel led the discussion, along with hosts Tim and Shelly Elkington, for a group of about twenty would-be winter greenhouse producers from as far away as the Iron Range.

With their Garden Goddess Enterprises in Milan, Chuck and Carol are pioneers in the practice of passive solar greenhouse design and production here in Minnesota, and their presentations and book, The Northlands Winter Greenhouse Manual, have spawned many similar projects throughout the colder latitudes.

Elk’s Bluff isn’t far, distance-wise, from Garden Goddess, but the Elkingtons have engineered a larger greenhouse with some different design features from the original. The meeting covered a few of those differences, but also featured some discussion of what benefits an association might have for clusters of winter producers–including building parties, aggregated materials and supply sourcing, and ongoing consulting services.

John and I are considering designs for a new garage/shop/summer kitchen building on the farmstead we’re purchasing, so we were there to gather information for a potential addition to this building-of-all-trades. And, well, I figured there might be something good and green to eat, too!

Marketing the bounty of the greenhouses has not posed much of a challenge for the producers–just the mention of fresh food in winter has created customer lists far longer than the small-scale producers can supply. One producer remembered a call from a manager of one of the Twin Cities farmers markets, pleading with her to bring her greens into Minneapolis. The resounding cry from the assembled crowd: “let ’em beg–we feed our own first.”

No doubt a collection of intrepid producers will at some point tap into that lucrative market, but here on the western edge of Minnesota, it would seem a crime to produce such a lovely abundance with such low energy inputs, only to burn tanks-full of gas to cart it across the state.

And, in my humble opinion, the cities don’t need to get every good thing first. A network of winter producers supplying rural Minnesota with the best, freshest food available can just as well add another layer of goodness to our good life here.

I sat down with the greenhouse manual late yesterday afternoon, before our traditional Irish supper of bacon and cabbage, and finished the thing before breakfast this morning. It looks totally doable, and pretty easy to add on to our existing plan, and so I handed it off to John for further consideration.

Instead of sugar plums, my slumber in between was punctuated by visions of buttercrunch and arugula, dancing along with me in a warm, sunny, and moist place to laugh off the winter blues.

The public is invited to a Strata Quarry Community Information & Listening Session tonight (Thursday, October 25) at 7pm at the New Life Baptist Church at 605 Minnesota Street North in Ortonville.

A plan by Strata Corporation of North Dakota to develop a granite aggregate quarry just south of Ortonville, in Ortonville Township, Big Stone County, along the Minnesota River is an issue dividing the community. Governmental bodies and citizens are at odds over the proposal.  Publicly available information about the project’s status is in short supply.

In order to support the public’s right to know and shed light on the proposed Ortonville Quarry Project, its history and its possible future, you are respectfully invited to attend this public event convened by The Ortonville Township Board of Supervisors and Township Planning and Zoning Commission.

Refreshments will be served.

Both meetings are on MONDAY, OCTOBER 15 (tomorrow, as of the date of this posting).

I don’t know why I was hearing there would be a special meeting of the city council at 5pm in city offices–first and third Mondays of the month at 7pm in the basement (sidehill entrance) of the library are the council’s regularly scheduled meetings, so it sounds like that is where and when the language will be considered/adopted. If I find out anything different, I will post ASAP.

These meetings are PUBLIC. And, the public is strongly urged (by me, and by all those who oppose annexation of the proposed quarry site in Ortonville Township) to attend.

If you care, do what you can to be there. 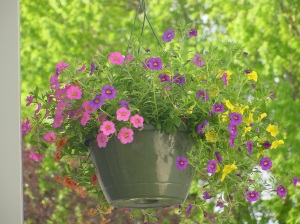 With Mother’s Day coming up next weekend–wouldn’t it be a great time to pick up that special basket or planter–a little ahead of the game this year? Hmm?

Word has it that the piano exhibit at the Memorial Building, “Keeping Time” will be open and accepting visitors. Great collection of pianos–and this coming from a person who once lived in a house with four of them. Fabulous fact: while you may think “drums and cowbell” when you think of percussion instruments, a piano is also a percussion instrument! How ’bout that?

And don’t ask me how many musicians I’ve lived with in order to gain that precious piece of information.

Later on in the afternoon/evening, The Cabin Cafe will be holding a Texas wild hog supper (with salads, dessert, and drink). They’re “raising the roof to raise the roof”–literally! The fundraiser is to help repair/replace the roof on the classic Highway 75 diner. The poster says 6pm, but rumor has it the house will be rockin’ earlier than that–and there will be a pottery show and sale along with the dining festivities.

Hope to see you in Clinton!

Are you interested in marketing your farm and its products online but don’t know where to start? Join Land Stewardship Project and University of Minnesota Extension for a workshop highlighting some of the many available social media and internet marketing tools, such as Facebook, Twitter, blogs, and websites, and how they can be used to connect your farm to potential customers throughout the region.

Ryan Pesch, U of M Extension educator, will delve into the specifics of online marketing tools (from free to $$) and provide individual assistance to farmers wanting to get started using these tools. Regional producers will discuss their online marketing strategies, the costs, the benefits, and how to build customer relationships by telling their farm story to an online audience.

Join us at the Milan Community School in Milan, MN on Monday, March 19 from 9-noon. Light refreshments will be provided. Fee for the workshop is $10 for LSP members and $15 for non-members. RSVP to Rebecca Terk, LSP Community Based Food Systems Organizer: (320) 305-9685 or rebeccat@landstewardshipproject.org.

This workshop will also occur in southeast Minnesota on March 27th. For details about the location or to RSVP, please contact LSP’s Caroline van Schaik: (507) 523-3366 or caroline@landstewardshipproject.org.

Error: Twitter did not respond. Please wait a few minutes and refresh this page.